“It’s the shirts with turtlenecks, ya know, the ones that wrap around your neck? It’s those I still can’t wear.”

Even though it’s been 14 years since leaving her abusive ex-husband, for Cindy there are particular prompts that even now give rise to recollections of terror during the years living under his control.

Cindy had grown up in a household that hadn’t spoken a lick of self worth into her young mind, her mother being the pioneer of abusive comments that would continue to reign in her head for years to come. One such phrase, “I wish you’d never been born”, creating a foundation of falsities that she would go on to deem as truth.

To this day Cindy can recall seeing her ex as a great guy in the early stages of their relationship, a label that began to fade as the need for control became more evident, insisting that she prioritize feeding him as a grown man rather than her infant son. It wasn’t until the age of 21, after the birth of her third child, that the beatings and verbal abuse began to take center stage. He began to develop his favorite forms of treatment, choking Cindy being among his choice selection of conduct.

“What could she do?”, was the thought that dominated her mind. Not allowed to hold a job, no phone, strict time restraints for completing errands–everything had a limit, a constraint, and she was trapped. With minimal job experience and being forced to live within the tight restrictions her husband enforced, she was stuck.

One evening, with her feet dangling inches above the ground from the hold around her neck pinning her against the wall, a friend of her abuser unexpectedly came through the door. This was the first of many friends and relatives that would learn of the torture occurring within their household, but unfortunately, it would be awhile until any had the heroic-sized courage to stand up to the tyrant controlling it all.

A heroine came indeed, in the form of Cindy’s sister in law. A fearless woman who Cindy recalls as being the only person able to help her in this state of defenselessness, the one person whom this abuser wouldn’t dare cross. One evening with him at work and the kids at grandma’s, she was free. Cindy left that night, taking her kids to live with family for awhile before she learned about His House, a shelter that fit her situation as being open to men, women and families alike; she and her kids moved in promptly.

Unaware of their whereabouts, her ex was no longer affecting her life and the lives of her kids and Cindy worked hard for seven months within this transitional housing, leading to finding her footing. She began to rebuild her life from the ground up, relying on friends from the past that assisted with her job search, as well as new friends that helped with providing rides and support.

With a consistent income established and her fear beginning to subside, Cindy moved her family to an apartment with a roommate she had met at the shelter. This apartment would serve to be just a phase in her journey, but was paramount in establishing her independence.

She soon moved her family from that home to begin a life with the man that would become her new husband, a man that had served as a close friend during some of her hardest times. He showed her a love she had not yet known up until this point in her life, seeing her at her truest form and loving her teen children as if they were his own.

They married in 2011 but soon after began to face struggles and feel financial stresses that affected their relationship. Although Cindy had spent time in church as a youth, she didn’t see that as resolving her current troubles; that is, until her thoughts went to that of her sister–a woman that despite her own trials never complained. Cindy compared her life to that of her sibling’s and knew she was missing something crucial.

After numerous invitations from neighbors to attend church, Cindy woke up one morning with a change of heart. Her husband accompanied her last minute to a service that would go on to shape a deep connection within the community at Eastside Christian Church.

A change of perspective was taking hold of both her and her husband as they felt the desire to get more involved. At an interest meeting for volunteers at Eastside, they were given a plethora of areas to step into, but as soon as Cindy learned of The Sheepfold–a shelter for abused and homeless women and their children–she knew exactly where God had lead her to be.

This strong and joyful survivor of domestic abuse now serves as a liaison between Eastside and The Sheepfold’s Volunteer Director, serving meals to the residents there and offering to speak to the women if and when they need a confidante to relate to.

Life is quite the journey as Cindy mentioned, God seems to lay out a number of stepping stones that may induce pain or heartache or threaten our self-worth, but in taking a glance back at the stones trailing behind, one’s true purpose and calling can be clearly seen. 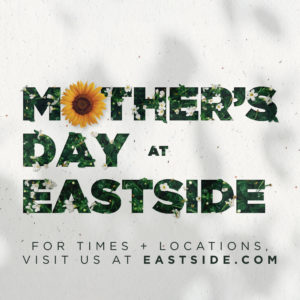 Back In the Black Week 2- What Test?

Back In the Black Week 1- Back to Basics